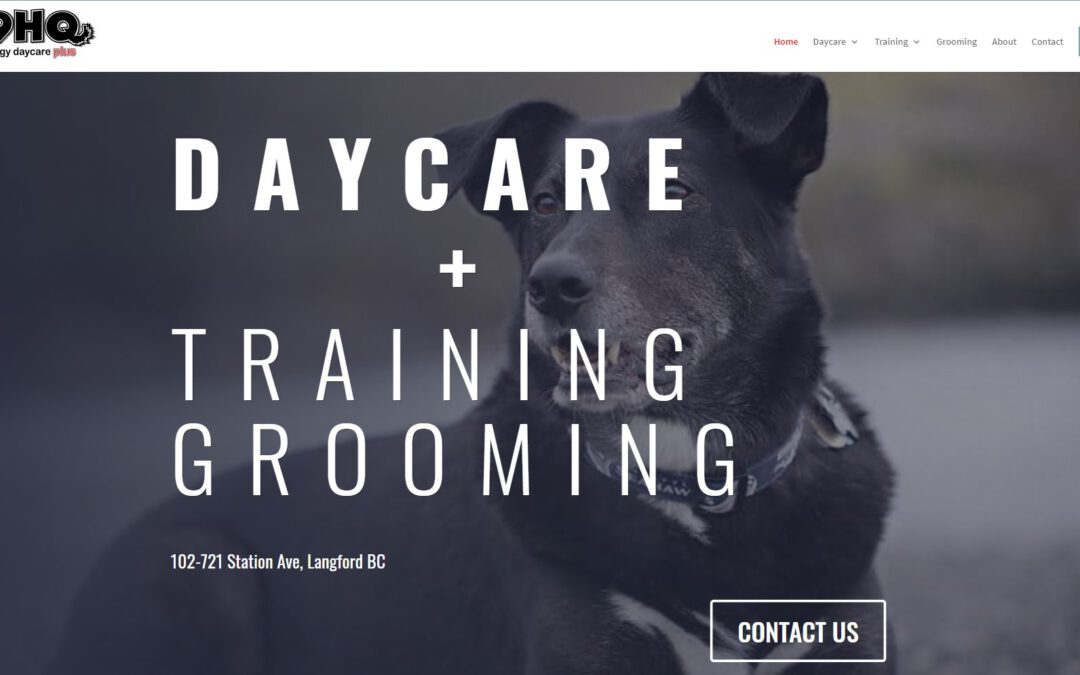 Happiness. Positivity. Safety. A focus on well-being. Those are the traits Jamie Patterson has built doggy daycare, training, and grooming centre, K9HQ Doggy Daycare Plus, around.

“K9HQ was created to give dogs a safe place to socialize, to learn from each other, and to get physical activity in throughout the day,” Jamie explains. “For us, transparency is huge: we want dog parents to know what’s going on and to be able to log onto our K9HQ cam and see their pups play and enjoy themselves here.”

​On top of ensuring that all dogs who come to stay and play at K9HQ Doggy Daycare Plus have passed all up-to-date vaccines and parasite control, they also guarantee the following from their staff and facility:

Why does K9HQ go to such lengths? “These clients aren’t dropping off their dogs; they’re dropping off their children,” says Jamie. “It’s crucial to us that trust is established. By having our webcam and other safety measures in place, dog parents have full transparency seeing our K9 Caregivers in the playrooms monitoring their dogs at all times.”

Doggy Daycares: Not Just For Puppies

A common misconception of doggy daycares, Jamie explains, is that they’re just for puppies, or just for dog parents needing a safe place to keep their dog during the workday. In fact, he says, older dogs often see a significant benefit as well.

“Many pet owners think that daycares are just for dogs to run around and burn as much energy as possible, which can be true, to an extent, for certain dogs and puppies,” Jamie says. “But we have a lot of older dogs who aren’t there for physical exercise: they’re instead benefiting from the mental stimulation of socialization in a group. As people get older we are told to socialize with others and play games to keep our minds sharp. Well, it’s the same for dogs! Friendly older dogs benefit from hanging out, sniffing other dogs, and socializing in order to keep them mentally enriched.

“We had one client,” Jamie continues, “who brought their dog into our care temporarily as a young dog. They came back to us nearly a decade later, claiming that his health and motivation were deteriorating and they didn’t think he had more than a month or two left. They asked if he could come back to K9HQ to try being with other dogs again. Within a week, his owners were blown away at his newfound ‘puppy energy’ and his zest for life was back. Coming back to daycare completely rejuvenated him and he lived another happy year, which we were beyond grateful that we got to share with him!”

How K9HQ Doggy DayCare Plus Came to Be

Jamie took over K9HQ 10 years ago. Through his years of ownership, the long-standing company evolved into a completely force-free facility following only evidence-based handling and training methods. This extended into grooming, training, and daycare services. He upgraded to a high res K9 cam and revamped the facility’s air conditioning to keep an optimal temperature throughout the summer months.

When asked about how his ownership of K9HQ came to be, Jamie responded fondly,  “I was a senior operations manager in the biotech industry in the United States and, for many years, had a house here in Victoria; I would basically come in once or twice a year to check on it,” he says. “After seven years of that it was time to ‘get a life’, so to speak, so after I quit my job I decided I was going to come here to Victoria and take a year off to recoup. On December 22, 2010, I went to the local SPCA to rescue a dog and that’s when I found my boy, Kasey, who ended up rescuing me instead.”

“He just turned 11 this past March. After we had taken the year off together, I realized I had to get a job. At the time, I didn’t know doggy daycares existed; but when a friend, who was a business broker, sent me the posting for K9HQ being for sale, Kasey looked at me, and I looked at him, and it was like everything clicked into place. I even met my wife through K9HQ. It was all meant to be… because of Kasey!” 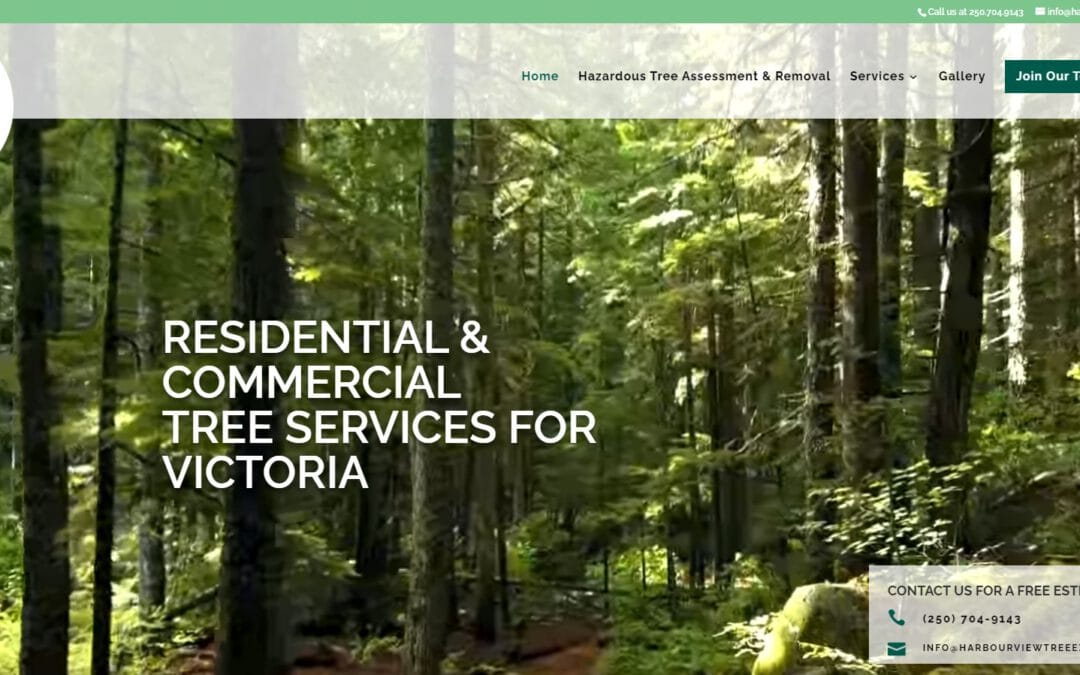 For Kim himself, however? His experience goes back much farther than the beginning of Harbourview Tree Experts. “My father was in the business,” he explains, “so I started working for him when I was still in high school. Even younger, maybe. It was the very first job skill that I learned. I’ve now done it full time since 1977, give or take four or five years when I was going to college at the time.”

Kim’s years of experience and natural knack with clients has earned Harbourview Tree Experts a reputation of reliability, affordability, and quality work. Year-round, they provide Greater Victoria with:

“Harbourview Tree Experts was created because I wanted to be my own boss,” says Kim. “Funnily enough, when I was working for other companies we were always being driven to complete jobs quickly and not spend time with clients. What I wanted was to be free to spend more time with my clients, to sit down and chat and have a cup of coffee to establish more of a personal rapport after a job was done.

“The feedback I get from clients about this now is terrific,” he continues. “While Harbourview Tree Experts do very good work, lots of people do very good work. The rapport I have with clients is a main reason why people keep booking; especially with how long I’ve been in the business, it’s easy for me to build that rapport with people. Often when people start in this business they can be uptight or have anxiety about selling services with people, but I don’t have any of that. If I’m talking to you as a client you’re getting exactly who I am, straight out of the can.”

The rapport I have with clients is the main reason why people keep booking; especially with how long I’ve been in the business, it’s easy for me to build that rapport with people. Often when people start in this business they can be uptight or have anxiety about selling services with people, but I don’t have any of that. If I’m talking to you as a client you’re getting exactly who I am, straight out of the can.

Kim explains that, because more people are out enjoying their gardens or taking up exterior property upgrades during the summer months, Harbourview Tree Experts receive frequent call-ins for pruning services. Luckily, Kim says it’s all hands on deck this summer in order to provide limb removal for trees and the trimming of hedges.

Hazardous tree assessment is one of their most popular services, regardless of the weather or time of year. He also reminds clients of Harbourview Tree Experts’ zero-obligation free estimate offer, which is available via the phone. “Free estimates are beneficial for clients because they can have someone come by and assess the project with them, have any questions answered, and have an accurate quote for the work,” Kim says.

Ready to receive quality residential and commercial tree services this summer? Then look no further than Kim at Harbourview Tree Experts.

If your business isn’t getting the exposure you need, maybe it’s time for Time2GetOnline. Contact us for a no-charge, no-commitment conversation. 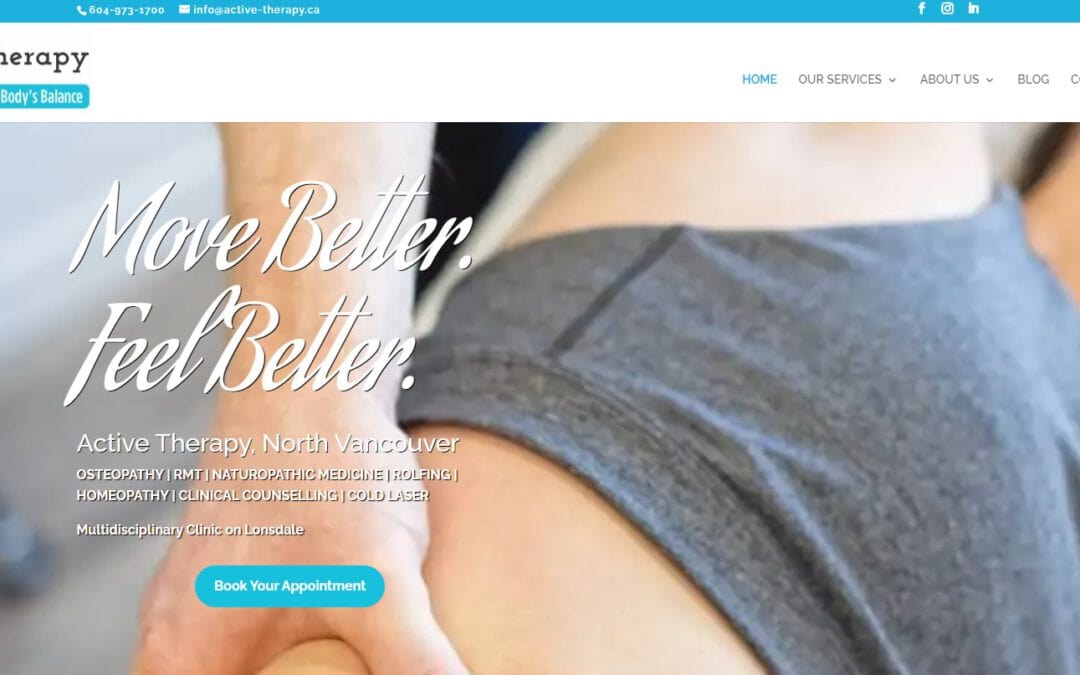 Imagine a Day Without Muscle or Joint Pain: Active Therapy Founder Michal Kapic is Striving to Make That a Reality for Vancouverites

At Active Therapy, Vancouverites can experience “unique, innovative, and exemplary care”… all with a holistic approach!

The clinic’s team of dedicated health professionals, which is made up of manual osteopaths, RMTs, naturopathic physicians, homeopaths, and certified Rolfers, the Active Therapy team makes it their mission to help your body feel, move, and perform better.

When it comes to the story of how Active Therapy came to be, its founder, Michal Kapic, explains that it was a long journey to opening their current Lonsdale location. “I started to be active in the industry in 2013 when I finished my rolfing education in Boulder, Colorado, and then moved to New Zealand where I first started to work as a certified Rolfer. That’s basically where my first idea of me becoming a health care practitioner started.

“I have had some surgeries and treatments in the past during my career as a soccer player and they helped me tremendously,” he explains. “That’s what kickstarted my desire to help others overcome their aches and pains.”

On top of their educational blog, which works to provide free expert advice to both existing patients and prospective patients, Active Therapy offers:

Gently restore your body’s balance for long-term relief thanks to the Active Therapy team.